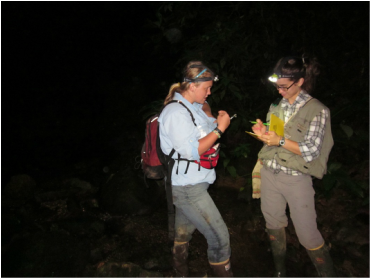 As the number of fungal pathogen outbreaks become more frequent worldwide, so have the number of species extirpations and communities persisting with the pathogen. This phenomenon raises questions, such as: “what leads to host extinction during an outbreak?” and “how are hosts persisting once the pathogen establishes?.” But rarely do the data on host populations and communities across life stages before and after pathogen arrival exist to adequately answer these questions. Over the past couple decades, the amphibian-killing fungus Batrachochytrim dendrobatidis (Bd) spread in a wave-like manner across Central America, leading to rapid species extirpations and population declines.

​I collected data on tadpole and adult amphibians in El Copé, Panama before, during, and after the Bd outbreak to answer these questions. I used novel Bayesian statistical approaches to account for imperfect host and pathogen detection of marked and unmarked individuals.

​In the tadpole community, within 11 months of Bds arrival, density and occupancy rapidly declined. Species losses were consistent with taxonomy, with glass frogs disappearing first, and tree frogs and poison-dart frogs remaining. I found that tadpole communities resembled one another more strongly after the outbreak than they did before Bd invasion. I found no tadpoles within 22 months of the outbreak and limited signs of recovery within 10 years. In contrast, for a population of male glass frogs, Espadarana prosopleon, I found that 10 years post-outbreak, the population was consistently half its historic abundance, and that the lack of recruits to the population explained why the population had not rebounded, rather than high pathogen-induced mortality. And finally, examining the entire amphibian community, I found high pathogen prevalence, low infection intensities, and high survival rates of uninfected and infected hosts. Bd transmission risk, i.e., the probability a susceptible host becomes infected, did not relate to host density, pathogen prevalence, or infection intensity– Bd transmission risk was fairly uniform across the study area. My results are especially relevant to conservation biologists aiming to predict the impacts of future Bd outbreaks, those trying to manage persisting populations, and those interested in reintroducing species back into wild amphibian communities.

This research was kindly funded by: