2015
SESYNC intern
Gabriel Almario joined us in the Lips' Lab to do an experiment with salamanders from Mount Rogers, Virginia. The project is still in progress, so please check it out at a later date! 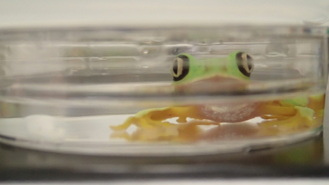 Research Experience for Undergraduates
This past summer, the Lips' lab hosted 2 hard-working undergraduate scholars (Chelsea Maguire & Lane Jackson). I worked mostly alongside Chelsea developing new techniques to quantify the number of live vs dead zoospores shed by infected individuals of 2 species. We look forward to continuing to work with Chelsea as she writes up the manuscript of this exciting project.

For more details on Chelsea's project, check out her video or her peer-reviewed paper!

​Panama-United States video exchange
Team Panama 2013 (RET scholar Edward Kabay and I) continued visiting the local school in Barrigon adjacent to the park. Our goals were to teach students to recognize local species, conduct basic surveys, collect appropriate data, and record those data. Students were also involved in a video project that will be exchanged with Mr. Ed Kabay's classroom in Chapel Hill, North Carolina. This project was started to open communication between Panamanian and United States students. Through the use of videos, students will be able to share experiences and appreciate differences between temperate and tropical habitats and basic amphibian ecology.

Check out our video here and here for more details!! 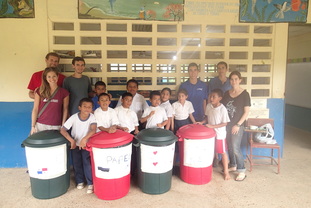 Recycling program
Edward and I also established the first recycling program at the local school in Barrigon this past summer. Four large bins were donated and will be used to separate recyclable materials. A partnership with the Director at the National Park was also established to begin regular pick up of the recyclables. Students will earn money for their school based on what items and the amount of material they recycle.

​Guest speakers for Kindergarten class at the National Park
Edward and I were also guest speakers for the Barrigon Kindergarten class at the National Park on a class fieldtrip. The goals of the lecture were to (1) expose students to the wildlife in their backyard, (2) teach students the differences between reptiles and amphibians, (3) teach students how to survey for animals, and (4) expose students to a few examples of live animals. Ed and I also took students, parents, and teachers on a guided forest walk. ​

​Reforestation project
Edward and I were also involved in a reforestation project at the National park, sponsored by a Panamanian cellphone company. Edward and I spoke to volunteers about current research being conducted at the park as well as the importance of conservation.
​
2012
Guest speakers for Barrigon Environmental class
Team Panama 2012 (Nicole Angeli, REU scholar Alex Cunha, and I) visited the local school in Barrigon adjacent to the park. Our goals were to promote science, amphibians and conservation. Students got hands-on training in amphibian species identification by looking at live frogs and listening to frog calls.  Students were excited to hear that amphibian diversity in Panama is much greater than many areas, and were saddened to hear of the loss of that biodiversity. We also described a range of projects going on just up the road and how it has contributed to the field of amphibian declines.

Alex honed his presentation skills in a talk on Global Amphibian Declines for the South Carolina Association of Naturalists.  Nicole described effects of disease on the spatial distributions of stream frogs, and I described the change in diversity of tadpole communities at the site. Our goal was to increase public awareness of amphibian declines, impacts declines have on the forest ecosystem, and how a microscopic fungus has caused so many changes at this site.
Powered by